Team New Zealand sent 20 athletes to the 16th World Transplant Games in Bangkok in 2007, and made history by returning with a record medal count from these games.

Many new members attended these games, together with family and supporters, and all quickly formed a bond which helped deliver the success enjoyed. 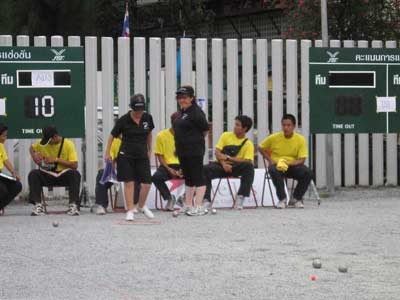 The opening ceremony on the Sunday allowed members of each country to mingle, swap stories as well as badges and talk about aspirations and thoughts for the coming week. Many of these new found friends would become competitors later that week, in various sports, and whilst the competition was of an exceptional high standard, the sportsmanship shown by all was greater still.

The games started for Team New Zealand in earnest on the Monday morning with cycling and ten pin bowling. Whilst our individual’s at the bowls just missed out in the morning, success was not long in coming in the afternoon as a bronze was collected in the female seniors pairs by Sara Ford and Pauline Murphy.

Tuesday meant a very early alarm call for the golfers, who had to travel some 120km to the Watermill Country Club. Breakfast was caught on the hop, and the bus stood still in Bangkok’s rush hour traffic, but eventually a clear road lay ahead as the overnight rain started to ease. It was not until the last groups teed off that the sun broke through and the golfers could enjoy the warm conditions. 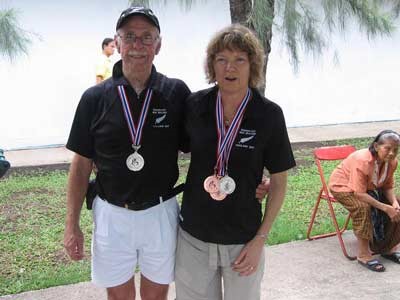 With the help of local Thai caddies the golfers returned with medals galore, one gold, two silvers and two bronze. Jason Dellow took gold in the net and silver in the gross (adult section) Ray Morrissey silver in net and bronze in gross (super senior section) and Jim Doyle a silver for his net score (super veteran section).

Whilst the golfers were swinging to success, Ian Patterson was showing that his backhand, forehand and smash were more than the match for his opponents in the tennis. Ian fell just short in the semi final, and had to settle for bronze, but more success on the tennis court lay in wait on Wednesday. 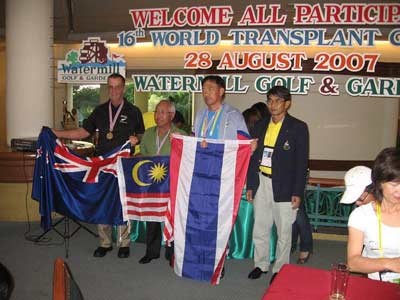 Buoyed with the results of Tuesday, the team went about securing more medals from the remaining four days, and success in the tennis doubles by Ian Patterson and Alan Power was at the forefront of Team New Zealand’s charge. Having secured a medal by reaching the semi finals, they went one step closer to the ultimate by securing victory, and a quest for gold lay ahead. The conditions proved taxing on all, but match point was won, and gold secured by Ian and Alan.

If the golfers set the standard for collection of medals, the swimmers raised the bar, with outstanding performances on Wednesday and Thursday. No less than seven medals were secured in various disciplines with Garry Cooke securing two silver medals, and Linden Kenyon equaling Garry’s silver medal haul, and adding three bronze medals for good measure.

Josh Milburn and Ken Newlands set about their task in the table tennis fresh from the record breaking news of events in the pool and put that energy to good effect, just falling at the semi final stage, but securing a bronze in the process. 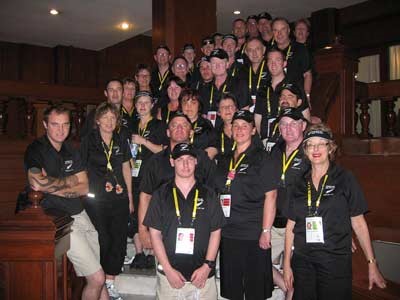 Petanque also proved to be a good hunting ground, as medals in singles and pairs was achieved. Pauline Murphy and Sara Ford secured a great silver in the female senior pairs, whilst both Bryan Eckersley and Aaron Heberley threw their way to bronze medals in the super vets and adult sections respectively.

Friday brought the onset of athletics, which would culminate on Saturday with the closing ceremony. It also saw success in shooting by Jim Doyle, in spectacular fashion. Jim had not entered the shooting, but was given the opportunity as a place became available, and set off with fellow competitor Lawrie Clark to the shooting range. At one stage it seemed that Jim would be denied as the organizers set about finding him a pistol, but eventually a gun was found and Jim set off for practice. It had been many years since he had last pulled a trigger, so any expectation he may have had was not high. He fired his competition shots, and then went to see how Lawrie was getting on. They both stayed until the end for the medal ceremony, and when the medal winners for the super senior section were announced Jim was somewhat surprised to be called to the stage to accept gold, Team New Zealand’s third of the games.

Medals followed at track and field with Glenn McLennan taking bronze in the cricket ball throw (adult section), and bronze also in the 5km walk. Bryan Eckersley continued his throwing success by netting a bronze in the shot put (super vets) and Shane Leger just missing out on gold by 4 cm in the long jump (adult section).

The end of the athletics at Saturday lunch time brought a close to the weeks events, and later that evening all could reminisce about each individuals experiences and share memories with other nations competitors at the gala dinner, on a truly memorable games.